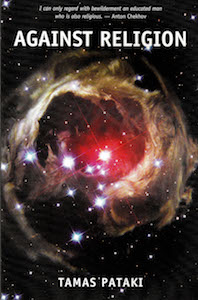 Tamas Pataki could be accused of misleading advertising. His title should have been Against Christianity or Against Monotheism. And his cover image, with its implicit hard-science associations, is misleading too, because he argues against religion primarily on the basis of Freudian theory.

To be fair, Pataki does warn the reader in his introduction that he is going to focus on the monotheistic religions. Christianity (the religion of about 33% of the world’s population) is his main target, while Islam (20%) and Judaism (a mere 0.2%) are often caught in his field of fire but less often singled out. He barely mentions Hinduism (13%) or Buddhism (6%), and in fact his prime argument applies to them poorly or not at all. END_OF_DOCUMENT_TOKEN_TO_BE_REPLACED

This site is divided into three main sections. The “search” box will only search the section you are visiting at the time, and the “home” page you reach by clicking on the site title is the home of the section.
These links are shortcuts to all three sections:
Green Path
Words & Images
Music